Burj Khalifa
Dubai excels in superlatives – tallest, largest, longest. The city is home to the tallest building in the world, Burj Khalifa, standing at 2,717 feet. Its 160 storeys dominate the Dubai skyline, shimmering in the desert sun and sparkling like a jewel at night.

Dubai Metro
As recognized by Guinness World Records in 2011, Dubai Metro Red Line is also the world’s longest single metro line to use driverless trains. The Red Line runs from Rashidiya in the east to Jebel Ali in the west and travels parallel to Sheikh Zayed Road for most of its length. It has 29 stations spanning 52.1 km. With below zero temperatures, you will quickly forget you’re in the Arabian Desert at Ski Dubai! It is an indoor ski resort with 22,500 square meters of indoor ski area, featuring 5 ski slopes. Ski, snowboard, toboggan, play in the snow or get up close and personal with the resident penguins. Shop till you drop at more than 1,200 retail outlets in Dubai Mall, the best fashion address in the city. Located at the foot of the Burj Khalifa and stretching across 1.1 million sq/m, it is the world’s largest shopping, entertainment, and leisure destination. 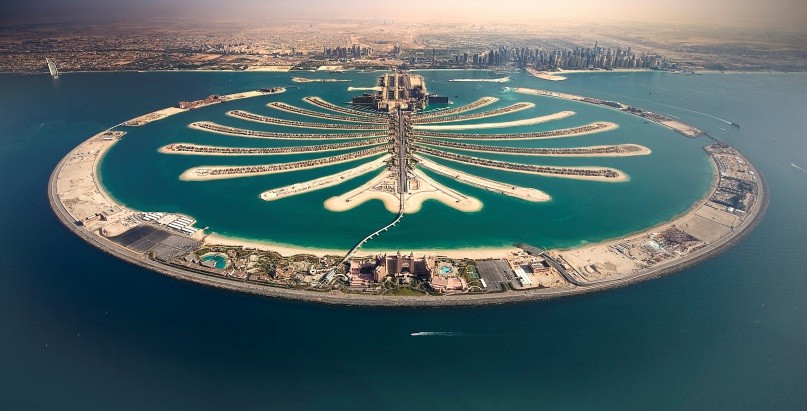 Jutting out into the Arabian Gulf is Palm Jumeirah, the world’s largest artificial island. Along the trunk and fronds are residences, hotels, shops and the Aquaventure Waterpark. The privately owned Palm Monorail, which runs along the trunk, gives you a good view of the island.

5. OLD AND NEW DUBAI: A TALE OF TWO CITIES Home to many glass skyscrapers and over 200 nationalities, Dubai thrives as a cosmopolitan and business hub. But as you wander along Dubai’s Deira neighbourhood, the contrast is striking. It is one of the oldest parts of the city, displaying goods ranging from textiles and trinkets to gold and spices. You always get the best of both worlds in Dubai.